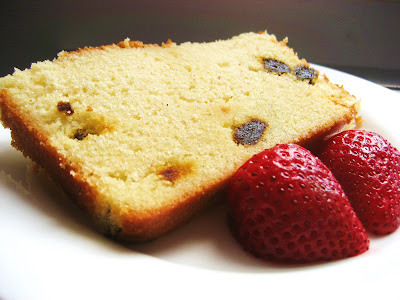 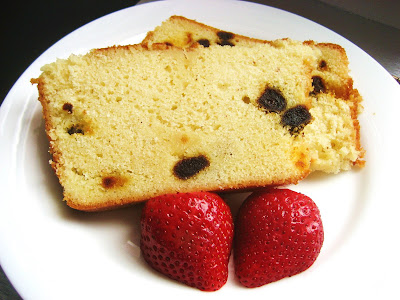 Less can be more. That’s my lesson after a recent baking experiment. I was poking through my cabinets to find inspiration when I came across a bag of dark dried fruit. I couldn’t figure out what they were. Not dates. Not prunes. Not figs. I then realized they were organic dried apricots. Without preservatives they turn brown after picking but they still taste the same.

I shuffled through my recipe collection and found one for apricot and cherry cake. However, it seemed a bit rich – lots of butter and eggs. To make it lighter, I reduced the butter and egg yolks and added yogurt. As I was beating the batter I noticed how fluffy it was – because of the egg whites.

The batter nearly filled the loaf pan. I thought about removing some of it, but figured it was unlikely to overflow.

Wrong. Halfway through baking, a burning smell reached the bedroom. Rushing to open the door, I saw that some batter had overflowed onto the bottom of the oven. It was blackening and starting to produce smoke. I’m sad to say this isn’t my first such experience so I knew what to do – I removed the cake, scraped the fallen batter, and placed the cake on top of a foil-covered baking sheet before sliding it back into the oven. In the end, it took much longer to bake and didn’t rise very much. However, it was delicious and reasonably light.

The lesson here is that by reducing the egg yolks and butter, I had created a fluffier cake which required a larger pan. Baking is a science so it’s important to understand the chemistry involved when experimenting. The other lesson is to trust your gut. When I saw how much batter there was I should have divided it into two pans.

The recipe below has been adjusted to produce just enough batter for a single loaf pan.

Please note I’ve created a new tag – Freezes Well – on the suggestion of one of my readers. I hope to add this tag retroactively.

Directions
1. Submerge and soak dried fruit in warm water for 15 minutes. Drain well and cut apricots into quarters. Set aside.
2. Preheat oven to 350F. Grease a loaf pan with butter. Line the bottom with wax paper, and grease and flour the pan.
3. In a medium bowl mix combine flour, baking powder, salt and nutmeg. Set aside.
4. In a large bowl beat butter on medium speed for 2 minutes. Add sugar and beat for an additional 2 minutes.
5. Add whole eggs and beat until combined. Add egg whites and beat for an additional 2 minutes.
6. Add yogurt and vanilla and beat until just mixed.
7. Reduce beater to low and add half of the dry ingredients, then the milk, then the remaining dry ingredients. Using a spatula, fold in apricots and cherries.
8. Transfer batter to the baking pan and smooth the top with the spatula. Bake for 45-60 minutes, until a cake tester inserted into the center comes out clean.
9. Allow cake to cool completely in the pan. Then unmold and serve. Can be kept in an airtight container or a well-covered plate for 3-5 days at room temperature, and up to one week in the refridgerator. To freeze, seal with plastic wrap and place in a Ziplock bag. Will keep for 3 months. To serve, unwrap and warm to room temperature.
Posted by AKR at 11:41 AM 0 comments 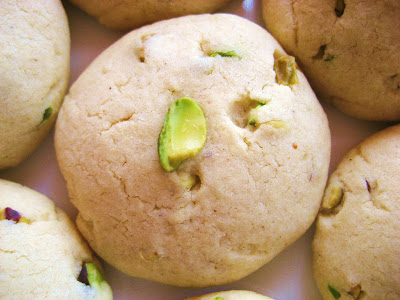 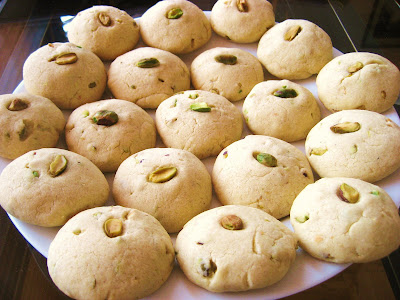 Pistachios are native to Iran, Turkey, Afghanistan and Turkmenistan and the first archeological record of their consumption dates to 6760BC in what is present day Jordan. They were brought to Italy from Syria during the reign of Tiberius in the first century. The word derives from Persian and comes to English via Latin.

While Iran still leads in international pistachio production, the United States is a close second. Until the 1970s, most pistachio consumed in the U.S. were imported from Iran. After relations between the two countries deteriorated starting in the 1970s, Americans started growing these nuts on plantations in California.

Pistachios are often eaten whole – salted or roasted - and are a popular flavoring in sweets such as ice cream, cookies and puddings. They are even more common in confections from the Middle East and South Asia including baklava and burfi among many others. These nuts are also traditionally used to make mortadella, an Italian pork sausage flavored with spices, nuts and herbs, and widely used in savory dishes from India, Iran and North Africa.

This recipe is my adaptation of nan khatai, an Ismaili shortbread previously featured on this site.

Directions
1. Preheat oven to 300 F. Grease or line baking sheet with parchment paper.
2. In a medium-sized bowl, mix flour, semolina, baking powder, cardamom, nutmeg and pistachios. Set aside.
3. In a large mixing bowl, beat butter and sugar until fluffy, approximately 3 minutes. Add egg and mix well.
4. Slowly add the flour mixture to the butter mixture. It may take a few minutes to incorporate all the flour. Add milk to soften the dough.
5. To form cookies, roll 2 tablespoons of dough between the palms of your hands to form a circular disk (thicker in the middle than at the edges). Place on a baking sheet and flatten slightly.
6. To decorate, gently press a pistachio into the center of each cookie.
7. Bake for 20-22 minutes until you see a hint of color. Do not bake until golden brown. Remove immediately to a wire rack to prevent further baking. Once cool, cookies should break easily but not be crumbly. If the cookies are crisp, then they were over-baked.
Posted by AKR at 4:07 PM 0 comments