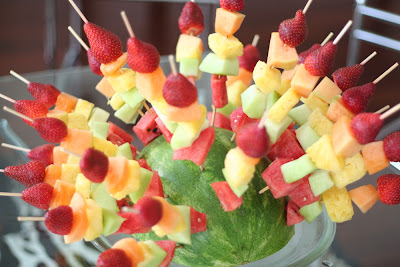 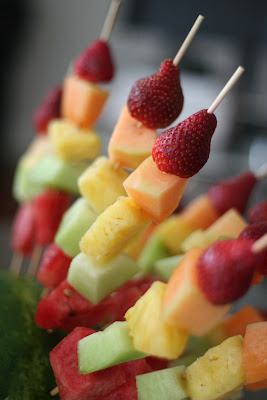 Last week I had dinner at Nougatine, a small Manhattan restaurant owned by celebrity chef Jean-Georges Vongerichten. The “amuse bouche” was a shot of watermelon juice with basil seeds and a spoonful of shrimp ceviche.

Although watermelons are available year-round as imports, domestic versions are at their peak from mid-June to late August. Many people purchase whole melons in the naïve belief that they can consume limitless quantities of this fruit. After all, it’s 92% water and has only 46 calories a cup.

For those of you who can’t figure out what to do with all of your melon, I suggest using it as a vessel or platform from which to serve a fruit salad. Here are some ideas from the web – the watermelon-as-carriage which is perfect for a baby shower. 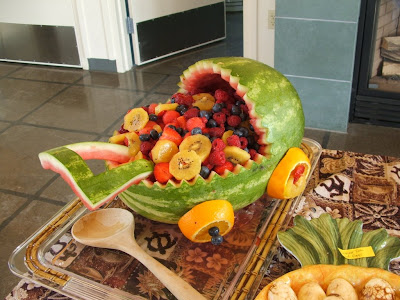 Fruit salads are one of the most popular dishes at the brunches I host – they are colorful, fresh and fat-free. When served immediately they are delicious, but there is nothing worse than discolored fruit swimming in juice run-off. This alternate way to serve fruit provides more visual appeal and leaves you with firmer leftovers. Select the fruit carefully. Avoid those that are soft (i.e. kiwi or raspberries), discolor quickly (i.e. apples or bananas) or that don’t display well (i.e. orange slices).

Ingredients
4 or 5 types of fruit such as: pineapple, honeydew melon, cantaloupe, red or green grapes, strawberries, watermelon, mango or any other firm colorful fruit
half a watermelon (as base)
wooden skewers

Directions
1. Cut each type of fruit into 1 inch cubes. You can cut up fruit a day in advance and store in the fridge covered in saran wrap.
2. Select the order in which fruit will be displayed. Experiment with several patterns to make sure that fruits of a similar color are not adjacent (such as watermelon and strawberries) and that the combination is visually pleasing. Some fruit is more firm than others, so use a firm fruit at the bottom of the skewer to prevent sliding during the display period.
3. Create all skewers with the same pattern and lay flat on a tray. These can be kept for several hours in a fridge, loosely covered with saran wrap.
4. Set half a watermelon on a large tray, leaving the watermelon flesh intact. You can eat it after it is no longer a display item.
5. Using one of the skewers, poke holes in the watermelon rind in a series of rows. To assemble, insert fruit skewers into these holes. 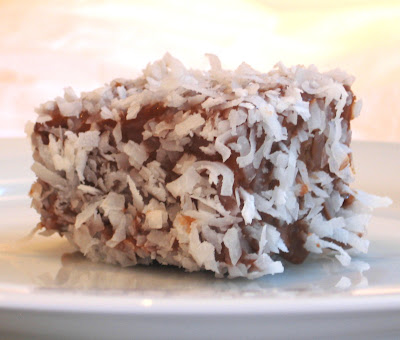 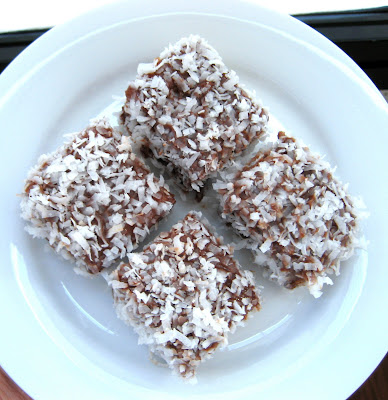 This week I feature lamingtons, another Australian treat that I discovered on my trip last year. They have been referred to as the “national cake” of Australia and were celebrated last year on July 21, which was named National Lamington Day. This year the day of celebration has been moved to August 10, so I am a little bit early.

A lamington is a cube of sponge cake, dipped in chocolate icing, and tossed in coconut. Often the sponge is filled with jam, cream or lemon filling. Newer versions use white chocolate for dipping and unusual flavors like lime or wattle seed. Lamingtons are a favorite tea-time snack down under, and are wildly popular in fundraising drives for churches, schools and girl guides (similar to the American bake sale).

They are most likely named after Charles Cochrane-Baillie, 2nd Baron Lamington, who served as Governor of the Australian state of Queensland from 1896 to 1901. The precise history of the association is not known, and the stories vary – some say lamingtons resemble a hat favored by the Governor; others say that they were a creative use for stale cake created by the Governor’s cook. The Baron is reputed not to have enjoyed the treats named in his honor.

As with many Antipodal foods, there is contention from New Zealanders, who claim lamingtons as their invention. Some claim that these treats were adapted from a cake made in the Scottish village of Lamington.

Icing
4 cups powdered sugar
1/3 cup cocoa
3 tablespoons unsalted butter, melted
3/4 cup milk
3 1/2 cups desiccated coconut (you can use sweetened coconut, as I did, but the dessicated is far superior because it is drier) 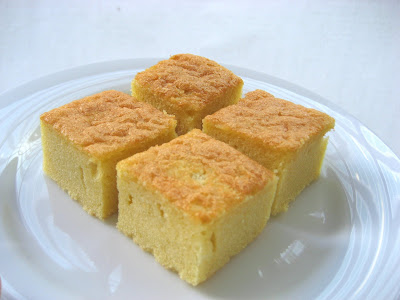 Directions
1. Preheat oven to 350F.
2. Line an 8 x 8 inch square pan with wax or parchment paper. Grease the pan with butter.
3. In a large bowl mix the flour, cornstarch, baking powder and salt.
4. In a separate bowl, beat the eggs until thick. Slowly add the sugar and vanilla as you continue beating.
5. Boil butter and water in the microwave.
6. Using a spatula, add the flour mixture to the egg mixture. Mix well and then add water and butter. Mix again.
7. Pour into the greased pan and bake for 30 minutes, or until a cake tester comes out clean. After 15 minutes, remove cake from the pan and allow to cool to room temperature. [the photo above shows the sponge cake before dipping]
8. To make the icing, mix the powdered sugar and cocoa. Add butter and milk and stir until smooth.
9. Cut the cake into 25 or 36 square pieces.
10. Using tongs or a fork, dip each square into the icing. Shake off excess icing and roll in a bowl of coconut. Allow to dip dry on a wirerack.
Posted by AKR at 12:08 AM 3 comments 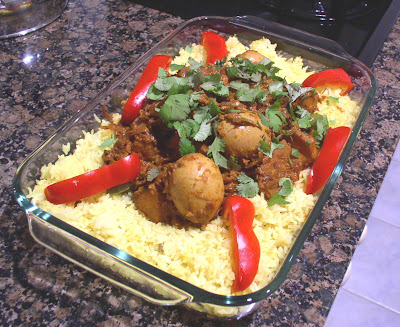 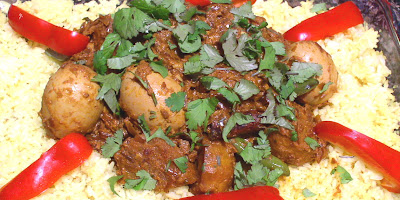 My summer wedding season is now in full swing. It began two weekends ago with an Indian Hindu-Christian union in San Francisco, continues this weekend with a gay couple marrying in the Hamptons, and will include nuptials in Luxembourg and Tuscany.

In the Ismaili tradition, a wedding meal centers around biryani, a rich and fragrant meat and rice dish that is traditionally served at feasts and celebrations. Biryani is distinctive for the richness and complexity of the meat, which is often marinated in yogurt and spices. In addition, the rice is usually flavored and scented for added appeal.

The term biryani comes from the Persian word beryā(n) which means “fried or roasted before cooking”, and is popular throughout South Asia and the Middle East. There are dozens of varieties specific to different regions, cultures and countries.

Persian in origin, biryani is thought to have been brought to South Asia by Timur (known as Tamburlaine in the West), a Turkish-Mongolian warlord who invaded India in the late 14th century. A different (and less common) version made its way to the subcontinent via Arab traders who landed at Calicut, in the Indian state of Kerala.

Traditionally the rice and meat are partially cooked separately, and then layered into a pot and cooked together to completion on low heat. My version, adapted from recipes from two different aunts, involves separate cooking of the rice and meat. While the most common type of biryani uses beef or mutton (goat), there are also vegetable, fish, quail, venison (deer) and prawn versions.

In addition to biryani, Ismaili weddings must include ladoos, a sugar-dipped chickpea flour sweet. Hopefully a recipe for ladoos will appear before the end of wedding season.

Rice
2. Wash rice according to directions on package. Soak in water for 30 minutes.
3. Heat the oil in a large pot on medium low heat. Sauté cardamom pods and cinnamon bark until bubbling.
4. Carefully add water (it will splatter) and salt. Increase heat to medium high to bring water to a boil.
5. Add turmeric and drained rice. When the water comes to a boil again, cover the pot and turn down the heat (though not quite as low as “simmer”). Make sure there is a small crack for the steam to escape.
6. After 10 minutes check to see that most of the water has evaporated. Shake the pot and lower heat to the lowest setting (usually “simmer”). Cook for another 10 minutes. As an alternative to the second 10 minutes of cooking, you can put the rice in an oven set to 225F to dry slowly. This will produce more fluffy rice.

Chicken Curry
7. Deep fry potatoes in oil. Make sure the potatoes are cooked all the way through. Remove and drain on paper towels.
8. In a large pot, on medium low heat, sauté garlic and ginger. Add fresh tomatoes, salt, lemon juice, turmeric and cilantro and sauté for 1-2 minutes. Then add tomato paste and garam masala and sauté for 2 minutes more.
9. Add the chicken pieces and 1/2 cup of the yogurt marinade. Cook the chicken for 15-20 minutes in a covered pot until the meat is no longer pink on the inside. Once the chicken is cooked, you should have a thick gravy. Sparingly add additional yogurt marinade if the chicken gravy seems too dry. If it is too thin, continue cooking uncovered to reduce.
10. Add potatoes and eggs and simmer for 5 minutes.
11. Serve in a large dish, topping a layer of rice with the chicken curry. Garnish with cilantro and slices or chunks of red bell pepper for color.
Posted by AKR at 10:14 AM 10 comments 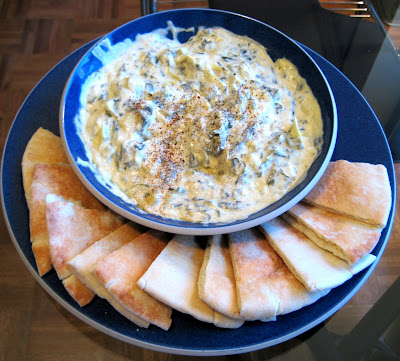 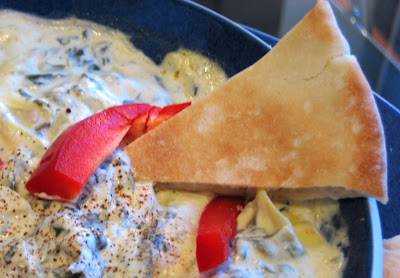 A year ago this month my dear friend Carla Larson took her own life, having lost a long battle with depression and bipolar disorder. Carla was a talented musician, artist, lyricist and writer. 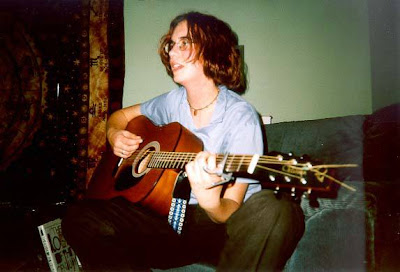 As far as I can remember, she is the only person ever to have written me a poem:

Interestingly, the poem portends my now blossomed passion for food. This week I honor Carla's memory with a recipe for spinach dip. This version can be made vegan (as in the poem) or dairy-rich.