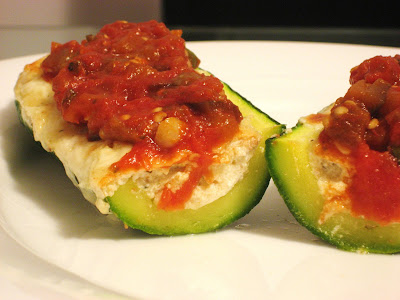 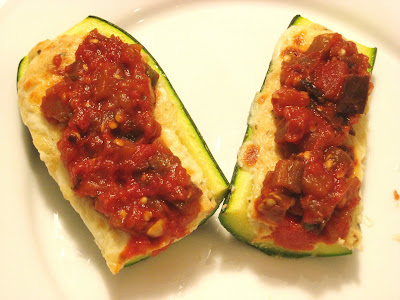 I’ve featured a couple of stuffed ‘vegetable’ recipes on this blog –mushrooms and peppers, though neither are technically vegetables. Today I’m featuring yet another fake vegetable, the zucchini, which is an immature fruit. I’ve written about zucchinis in another post so will not repeat myself. However, in re-reading that entry I realized that I never posted my zucchini bread recipe. I’m going to make it tomorrow for a friend who is visiting from San Francisco and will have it up on Treat a Week in the next few weeks. Vive lo zucchini!

Directions
1. Preheat oven to 375 F.
2. To make the stuffed zucchini, in a large skillet over medium heat sauté garlic in olive oil until fragrant. Add onion and sauté until translucent. Set aside.
3. In a medium bowl, mix the next ten ingredients. Add the sautéed onions once they’ve cooled.
4. Wash zucchinis and chop off the ends. Slice in half lengthwise. Using a teaspoon, melon baller or paring knife, remove the inner flesh containing the seeds. 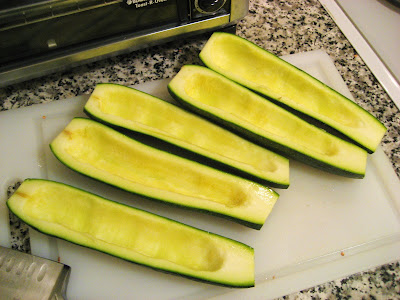 5. Fill the zucchini halves with the ricotta mixture. Place the zucchini in an oiled Pyrex baking dish. Sprinkle with mozzarella.
6. Bake for 30 minutes or until the ricotta mixture is set and the mozzarella has melted.
7. While the zucchinis are baking, make the eggplant ragout.
8. In the same large skillet on medium heat, sauté garlic in olive oil until fragrant.
9. Add eggplant and sauté for 8-10 minutes, stirring frequently. Add pasta sauce and cook for 4 more minutes. Reduce heat and add the remaining ingredients. Cook for a further 2 minutes. Turn off heat and keep the skillet covered.
10. By now the zucchinis should be baked. Broil them on low heat for 3-4 minutes or until the mozzarella begins to turn brown. Remember to leave the oven door open during broiling. 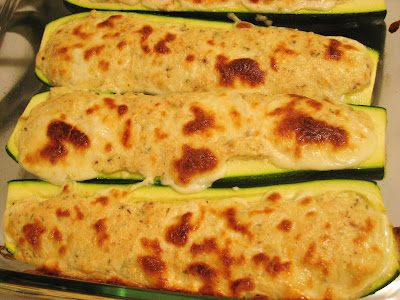 11. Serve the zucchini topped with eggplant ragout.
Posted by AKR at 7:11 PM 4 comments 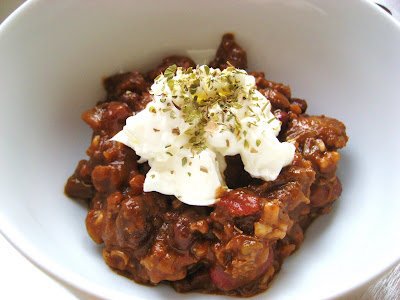 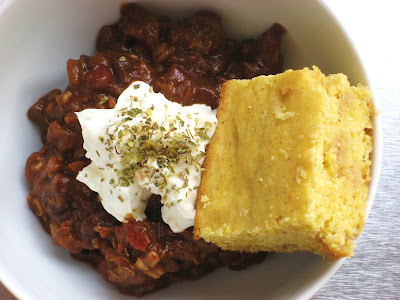 Chili, also known as chili con carne, is a stew traditionally made from beef, chili peppers, garlic, onions and spices. The origins of chili are unclear, but it seems to have been invented in Mexico in the mid to late nineteenth century. It was a popular way to use leftovers and to stretch available meat. One theory holds that it was served as a complimentary side dish at saloons before becoming a free-standing meal.

Today chili is primarily associated with Texas and is the state’s official dish. It became popular as a street food in San Antonio, where it was sold by women who became known as ‘chili queens’. Health department regulations ended this practice, after which chili parlors became popular. The dish acquired a national and international profile at the 1893 World's Columbian Exposition in Chicago where it was served at the San Antonio Chile Stand.

Traditional Texan chili contains no beans, tomatoes or other vegetables. Purists have coined a popular phrase to underline this fact, “If you know beans about chili, you know chili ain’t got no beans.” However, these ingredients are now widely used in chili recipes to stretch portions, accommodate vegetarians or provide variety. Some recipes substitute beef with turkey, chicken, venison or other game meat. Vegetarian versions are also popular. Regional variations incorporate rice or macaroni, and many use ‘secret’ ingredients including fruit, alcohol, sweeteners, coffee, chocolate, peanut butter, spices or vinegar.

Chili is now served in a variety of ways including on spaghetti, baked potatoes, hot dogs, rice, corn chips or French fries. The dish has become a staple at Super Bowl parties. Its popularity has spread and chili is now available in France, Denmark, Sweden, Canada, United Kingdom, Japan and Australia.

Directions
1. Heat half the olive oil in a large, heavy, preferably non-stick pot over medium-high heat. Add the garlic, onion, bell pepper, oregano and cumin and cook, stirring, until fragrant, about 3 minutes. Remove and set aside.
2. Heat remaining olive oil. Add the turkey, breaking it up with a metal or plastic spoon, and cook until the meat is no longer pink, about 3 minutes.  Add back the onion and bell pepper mixture.
3. Stir in the tomato paste, chili pepper flakes, taco seasoning, salt, chili powder, and chocolate or cocoa powder; cook 1 minute more.
4. Add the beer and simmer on medium heat for 8-10 minutes.
5. Add the tomatoes and their juices, kidney beans, and black beans. Bring to a boil and cook uncovered, stirring occasionally, for about 10 minutes.
6. Serve garnished with sour cream, cheddar cheese or sliced green onions. Serve with warn cornbread.
7. Store covered in the fridge for one week or in an airtight container in the freezer for three months. 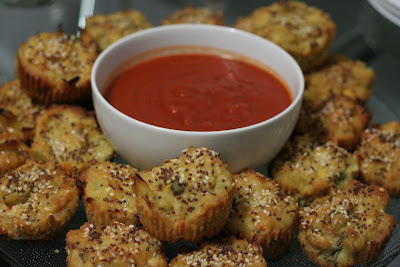 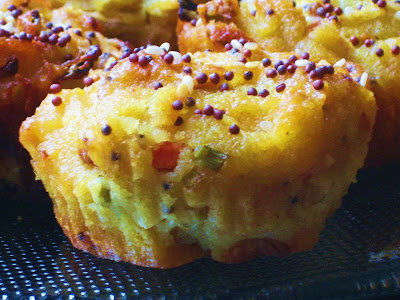 Ondhwo is one of my comfort foods. It’s a flavorful Gujarati cake often served as an appetizer or tea-time snack. Although baked, it involves the addition of a vagaar, tempered spices, which I wrote about in a previous post. The cabbage is relatively unnoticeable but provides moisture that creates a dense cake. Ondhwo is similar to the more well-known dhokla – a lighter, steamed cake.

This is another recipe from my mom’s repertoire, although the chutney is my bastardized version of the original.

Directions
1. If possible, make the chutney a day or two in advance. To do this, mix all the ingredients in a small bowl. Add more chilli sauce or salt to taste. Store covered in the fridge until ready to serve.
2. Preheat oven to 325 F. Oil a 9-inch springform pan. Line the bottom with parchment paper.
3. To make the savory cake, mix chickpea flour and semolina. Add cabbage and mix well.
4. Add sugar, yogurt, garlic, ginger, turmeric, salt, chilli powder and citric acid. Mix well.
5. Add water, onions, peas and carrots. Then add oil and mix well. Set aside.
6. To make the vagaar, heat oil on low to medium heat for 3 minutes in a small skillet. Then add mustard seeds, cumin seeds, curry leaves, and sesame seeds and cook for 1 minute until fragrant. Remove skillet from the heat.
7. Add the hot vagaar to the savory cake mixture. Add Eno’s fruit salt and mix well.
8. Pour batter into springform pan. Sprinkle top with dried chillies and sesame seeds. Bake for 60-75 minutes until golden brown and a knife inserted in the center comes out clean. To make individual ondhwos pour batter into aluminium muffin liners and bake for 20-30 minutes or until done.
9. Slice and serve warm with tomato chutney. Store in an airtight container for up to one week in the fridge or up to three months in the freezer.