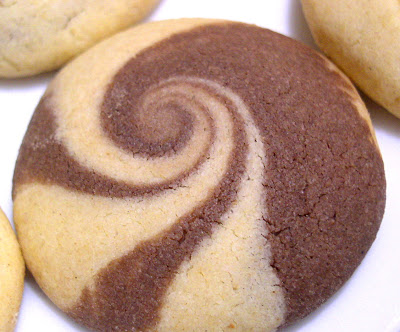 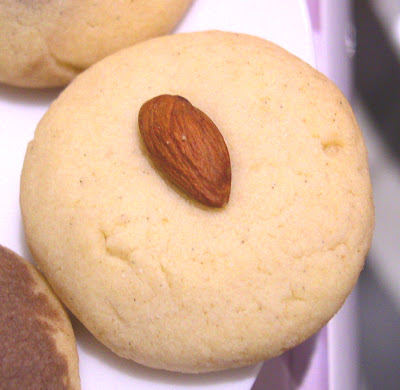 Growing up, nan khatai were one of my favorite treats. I couldn’t resist their rich, buttery sweetness, especially hot from the oven. I remember sneaking tastes of dough from the bowl behind my mother’s back (in the days before I was concerned about raw eggs and salmonella). My mom mostly made plain nan khatai, decorating each with a fingerprint of green food coloring. An aunt later introduced us to the chocolate swirl nan khatais which are a delicious alternative.

Given the similarity to European shortbread, I decided to do some web research which revealed that since the 17th century shortbread-like cookies were made in Western India and were popular among European sailors. Later cookies were also imported from England. However, during the swadeshi movement for Indian self-reliance, such cookies were produced locally in tandoor ovens. Nan khatais are believed to have originated in Surat, a large port city and district in Gujarat. These confections are particularly popular in Bombay, which has a large Gujarati population. They are also common in Pakistan.

Online I found a reference to nuncatie, a variation of nan khatai, which was given two possible etymologies: from a Persian word meaning the “bread of Cathay or China” or from the Persian words nan (meaning bread) and khat (meaning six, referring to the six component ingredients – flour, eggs, sugar, ghee (butter), leavening and almonds).

This version of the peripatetic nan khatai comes to you from Chicago by way of Canada and Kenya. 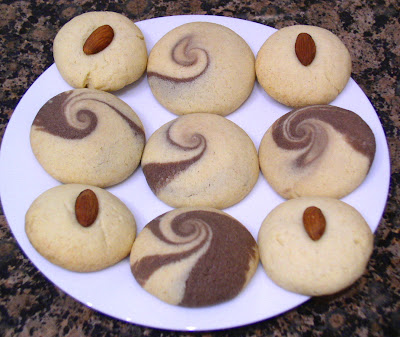 Directions
1. Preheat oven to 300 F. Grease or line baking sheet with parchment paper.
2. In a medium-sized bowl, mix flour, semolina, baking powder and cardamom. Set aside.
3. In a large mixing bowl, beat butter and sugar until fluffy, approximately 3 minutes. Add egg and mix well. You can omit the egg or replace it with 2-4 tablespoons of whole milk. If you do, the baked cookies will have a crackled (instead of smooth) surface.
4. Slowly add the flour mixture to the butter mixture. It may take a few minutes to incorporate all the flour. Don't feel obligated to use all the flour if your dough is becoming dry. Add milk to soften the dough again.
5. To form cookies, roll 2 tablespoons of dough between the palms of your hands to form a circular disk (thicker in the middle than at the edges). Place on a baking sheet and flatten slightly.
6. To decorate, gently press an almond into the center of each cookie.
7. If you would rather make chocolate nan khatais, place 1/4 of the dough in a small bowl and add cocoa. Incorporate cocoa by kneading. Take dough in the proportion of 1:3 (chocolate to unflavored) and roll both pieces into tubes of the same length (the chocolate tube will be much thinner). Roughly braid the tubes and roll the nan khatai in your hands until the doughs swirl. Place on baking sheet and flatten slightly.
8. Bake for 20-22 minutes at 300 F, until you see a hint of color. Do not bake until golden brown. Remove immediately to a wire rack to prevent further baking. Once cool, cookies should break easily but not be crumbly. If the cookies are crisp, then they were over-baked.
Posted by AKR at 10:20 PM

this truly looks like a work of art! the most beautiful nankhatais i've seen

These are gorgeous! I love the ones with the swirl!

I am intrigued by the connection to Kenya as we lived there for a while, too!

Cookies are fabulous but my swirls don't come out as pretty as yours. Can you give me some more detailed inx an/or pics of how you braid the two colored doughs together ( 1/3 proportions) to make this pattern? many thanks

I am so glad I found your blog... this is just what I was looking for my son's lunch box!

I am going to try it out soon.

can u show how u braid two colour doughs together tks

I'm the owner of this blog. I made this recipe again tonight and I think the flour should be reduced to 4.5 cups (instead of 5 cups).

I'm the owner of this blog. I made this recipe again and I used two eggs instead of one to give the cookie a smoother surface texture.

I tried this recipe and it turned out to be really delicious, the problem is I can’t get the chocolate incorporated with good design. Is there a video to teach me how to roll with two dough. White and chocolate nan khatai?
Thanks!

I tried this recipe and it turned out to be really delicious, the problem is I can’t get the chocolate incorporated with good design. Is there a video to teach me how to roll with two dough. White and chocolate nan khatai?
Thanks!

I am here to tell you about a natural remedy that is
guaranteed to make you wonder why your doctor didn't tell
you about it. Then, on the other hand, it is pretty obvious
why your doctor didn't, because that's not his job, is
it? But, seriously, promise me you won't get too angry
with your health practitioner, it's really not their
fault. They can only practice what they're told to
practice, right?
When your health is at risk there's no time for Tom
foolery, you've got to get down to the cause and nip it
in the bud. So you've been suffering from painful gout
attacks have you? Well, allow me to give you a new
perspective on the solution to what plagues you I was once in your shoe until my college friend introduce me to Dr Itua herbal center which cure my hiv/herpes after drinking it for two weeks as instructed, Dr Itua is an africa herbal doctor who has natural power to cure the following diseases: Herpes,Hiv,Hepatitis B,Fibroid,
Schizophrenia,Cancer,Scoliosis,Fibromyalgia,Fluoroquinolone Toxicity Syndrome Fibrodysplasia Ossificans Progressiva.Fatal Familial Insomnia Factor V Leiden Mutation ,Epilepsy Dupuytren's disease,Desmoplastic,Diabetes ,Coeliac disease,Creutzfeldt–Jakob disease,Cerebral Amyloid Angiopathy, Ataxia,Arthritis,Amyotrophic Lateral Sclerosis,Alzheimer's disease,Adrenocortical carcinoma.Asthma,Allergic.
As Dr Itua assure me that all those disease below that he guaranty 100% permanent cure to all these disease I believe Dr Itua so much because he help me cure my hiv/ herpes which has being my burden in life so I promised Dr Itua that I will testify about his work online after curing me and that is what I'm doing here so please if you are suffering from those diseases do not hesitate to write Dr Itua Herbal Center On Email: drituaherbalcenter@gmail.com Or chat with him on whatsapp:+2348149277967

Writing on any subject is not an easy task, when you write on any subject it is very difficult. Anyone who thinks that he will write something easily on any subject, then his thinking is very wrong, I do not know that perhaps those people will have to put so much mind. Whatever you have written in your post, it has been written very beautifully, you are a person writing a good post, the more you are praised, the less it is.